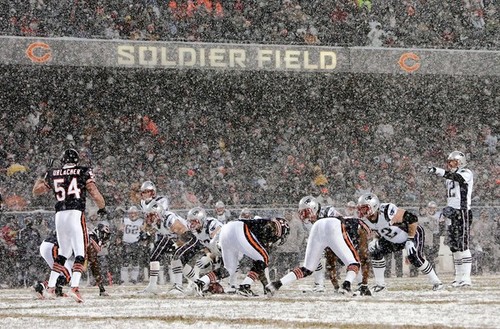 The 2014 Super Bowl will be bigger than big. It will be humongous, enormous, gigantic and more. That is the announcement from NFL officials and dignitaries from New York and New Jersey. Now, if they can just sell the idea to Mother Nature…
Super Bowl 48 will be a joint production between the two northeast states. MetLife Stadium in Jersey seats 80,000 fans, while New York’s part of the February 2 show will include closing a portion of Broadway for a football fan festival. “Super Bowl Boulevard” will extend from 44th St. down Broadway to 34th. St.
The game’s media center and the televised NFL Honors awards show also will be in the city.
Contingency Plans
The NFL knew that it was taking a risk by having the Super Bowl in the New York/New Jersey area. MetLife Stadium might be a beautiful venue but it does not have a roof to protect players and fans from the elements.
The NFL is reportedly developing a plan to play the game either a day earlier or after Sunday should weather conditions dictate. However, that would threaten the start time of the biggest single day sporting event in the world.
A vivid reminder of this risk was seen in January when the East Coast was buried by a foot of snow or more in some areas. A repeat of those weather conditions would be a disaster as it would make travel to and from the stadium impossible.
The league is already taking hits in the media over where the game is being played. One of the harshest critics is sportswriter Greg Cote of the Miami Herald; “The NFL, with this open-air Jersey Super Bowl, has hijacked our de facto National Holiday and sold it to the most bitter of surroundings.” By surroundings, he refers not only to the wind and cold, but to the “gray banks of sludge (far too ugly to be called snow)”.
Frozen Tundra
The National Weather Service said the average high in nearby Newark, N.J., on February 2 is 39.8 degrees and the low is 24.2. The average precipitation on that date going back to 1931 is about one-eighth of an inch. The record low for a Super Bowl kickoff is 39 degrees. That came 41 years ago when Dallas beat Miami at Tulane Stadium in New Orleans.
That’s Entertainment
Weather concerns will probably mean no halftime show at Super Bowl 48. Before dismissing that news with a “whatever”, remember that Madonna’s halftime show in 2012 attracted 114 million US viewers. Only 111 million people watched the actual game.
49ers seeking return engagement
We know the weather will not be ideal for Super Bowl 48, but it should not bother either San Francisco or Denver. The 49ers and Broncos are the current favorites at 7/1 with the Patriots right behind at 15/2. Both Denver and New England would have a decided weather advantage over a West Coast team like San Francisco or Seattle.