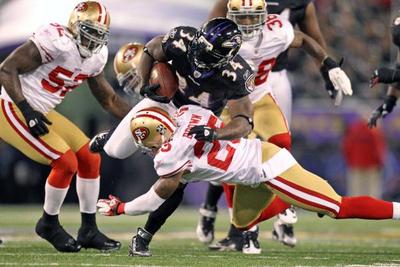 It will be a brother versus brother matchup in Super Bowl 47. Call it the ‘Harbowl’.

Super Bowl XLVII is set for Sunday, February 3, when the Ravens and 49ers square off. San Francisco will be out for its sixth championship in franchise history but first since 1994 when Steve Young was quarterback. Baltimore is seeking its fourth NFL title in as many tries.

The 2013 Super Bowl odds saw the 49ers instilled as a five-point opening line favorite with the total at 49.5. However, the number is currently -4 and 48 at most shops.

Jim Harbaugh’s 49ers beat the Atlanta Falcons 28-24 covering the spread for those who bought it at -3 or 3.5. Well north of Atlanta, John Harbaugh’s Ravens pulled off a stunning upset beating the Patriots 28-13 as an eight-point underdog.

Colin Kaepernick and Frank Gore led the way as San Francisco came back from a record deficit to stun the Falcons in Atlanta. The 49ers spotted the NFC South Champions a 17-0 lead before storming back for their first NFL title since 1994 when Steve Young was quarterback.

Gore scored a pair of touchdowns, including the winner with 8:23 remaining, giving San Francisco their first lead of the day. It was the 49ers’ defense that made it stand up. A fourth-down stop at the 10-yard line denied Atlanta another thrilling comeback after once again blowing a sizeable lead.

Kaepernick did not run like he did against the Packers (181 yards) but took apart Atlanta through the air. San Francisco’s dual-threat QB completed 16 of 21 pass attempts for 233 yards and a touchdown. Gore and LaMichael James combined for 124 yards and three touchdowns.

If your last name was Harbaugh and your team was wearing road uniforms, Sunday was a good NFL day.

Overall the NFL playoffs went the way of the favorites who were 8-2 SU and 7-3 ATS. The tone was set in the wild card round when the favorites compiled a perfect 4-0 ATS mark.

Following a 4-0 streak to the under in the first round, the over cashed in every game after that with the exceptions of the AFC title fight. Incidentally, Baltimore posted the only two road victories of this year’s playoffs.

The favorite has won the Super Bowl 27 out of 46 times, and in 22 of those games, the favorite also covered the number. That is an astonishing 80% ATS winning percentage.

The last decade and a half though has not been kind to players who wagered on the SB favorite. In the last 16 NFL championship games, the favorite has only covered on five occasions.