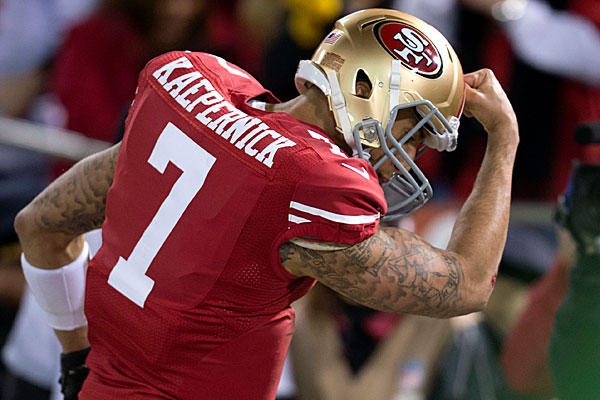 Even though the San Francisco 49ers failed to get the NFC’s top playoff seed, their appearance in the Super Bowl comes as no surprise to most people. The fact that the 49ers are playing the Ravens is about the only real surprise given that Baltimore had to win three grueling games, including two on the road to make it to Louisiana.
The 49ers remain four-point favorites for the 2013 Super Bowl on Sunday, February 3. Game time is 6:30 PM ET at the Mercedes-Benz Superdome in New Orleans. Television coverage will be on CBS.
San Francisco Treat
Colin Kaepernick will go down in history as being part of the gutsiest coaching move of Jim Harbaugh’s young career.
Ten games into the season, San Francisco quarterback Alex Smith ranked fifth in quarterback rating (104.1), first in completion percentage (70.0%) and fourth in yards per attempt (7.98). However after suffering a concussion against the Rams in Week 10, Smith never started again. Kaepernick was named the team’s new starting QB and the rest, as they say, is history.
Kapernicking
Kaepernick finished the regular season throwing for 1,814 yards with 10 touchdowns and just three interceptions. His work in the playoffs has been even better; 496 yards passing, 202 yards rushing and a combined five touchdowns. Kaepernick’s versatility was a crucial factor in beating the Packers and Falcons and figures to be the difference against the Ravens.
Harbaugh’s decision to change quarterbacks has given the 49ers a totally different character. Instead of being a team that relied on defense and field position, San Francisco now boasts a quick-strike offense that is capable of moving the ball with equal ease on the ground and through the air.
Offensive Weapons
Kaepernick has elevated the play of Michael Crabtree turning him into a legitimate No. 1 wide receiver while tight end Vernon Davis continues to be a threat. Running back Frank Gore (1,446 yards) is having a solid year while LaMichael James has emerged as a dangerous weapon along the lines of Darren Sproles. San Francisco’s offensive line is one of the best, if not the best in the league.
San Francisco’s defense allowed just 4.7 yards per play during the regular season, which was the best mark in the NFC. The 49ers surrendered the second-fewest points in the league. Lineman Justin Smith has shown he can hold up despite playing with a torn bicep.
NFC Knockout
The team representing the NFC in the Super Bowl is 5-0 ATS over the last five Super Bowls, a trend the 49ers want to continue. The NFC is 4-1 SU over the last five Super Bowls with wins in each of the last three. The underdog is 5-6 SU and 8-3 ATS over the last 11 Super Bowls.
With Kaepernick at QB, San Francisco has gone 7-2 SU and averaged 28.5 ppg. He is big, versatile and fearless – and it seems someone forgot to tell him that a guy with only nine career starts is not supposed to be in the Super Bowl.