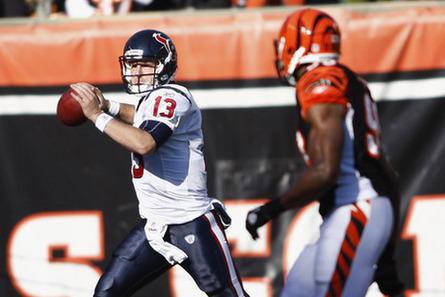 The NFL’s Wild Card weekend gets underway Saturday with two games including an AFC rematch between the Texans and Bengals. The postseason doubleheader begins at 4:30 PM ET at Reliant Stadium in Houston. The Texans opened as five-point favorites and are currently a -4.5 point pick. The total is 46.
The late game on Saturday is in the NFC where the Minnesota Vikings visit the Green Bay Packers. Kickoff is slated for 8 PM ET at Lambeau Field. The Packers are currently favored by -9.5 with the total at 46.
AFC Wild Card Preview
Houston (12-4 SU, 9-7 ATS) comes into the game on a two-game losing streak and are not exactly oozing confidence. After starting the season 11-1, they have lost three of their final four games. The late season skid cost the Texans the No. 1 seed in the AFC and home field advantage throughout the playoffs. On the other sideline, Cincinnati (10-6 SU, 9-6-1 ATS) is rolling into the playoffs, winning and covering in seven of its last eight games, including four in a row on the road.
Wild Card Rewind
These teams also met in the first round last season. The Texans, with T.J. Yates starting at quarterback in place of an injured Matt Schaub, won easily 31-10 as a four-point favorite. Arian Foster rushed for 153 yards and two touchdowns in Houston’s playoff win over the Bengals last season.
The key to this game is Cincinnati’s defense which has been nothing short of spectacular. In its last eight games, Cincinnati has not given up more than 20 points and has held six of its last eight opponents to 13 points or fewer. The Bengals defense, which ranked second in the league with 51 sacks, figures to make life miserable for Schaub.
Trends
The Texans beat the Bengals twice last season, clinching the AFC South title on a last-second 20-19 win at Cincinnati.
Houston is 6-2 SU and 5-3 ATS at home this season. Cincinnati is a profitable 6-2 SU and ATS on the road.
NFC Wild Card: Packers Favored on Frozen Tundra
The Packers missed out an opportunity to get an extra weeks rest by losing 37-34 in Minnesota on Sunday. Now the two teams meet again with Green Bay almost a two score favorite. Adrian Peterson has rushed for 409 yards in the first two meetings against the Packers. If Green Bay wants to take the next step on the road to the Super Bowl, they will need to do a better job against Peterson. Meanwhile, Packers QB Aaron Rodgers presents an equally significant challenge for the Vikings. He threw for 365 yards and four touchdowns on Sunday and appears to be peaking at just the right time.
Trends
Minnesota is 3-5 SU and ATS on the road this season. Green Bay is 7-1 SU with their only loss at Lambeau coming in Week 1 to the 49ers. They are 5-3 ATS at home.
The Vikings and Packers have been twice-yearly opponents since 1961, but this will be just their second-ever meeting in the playoffs.