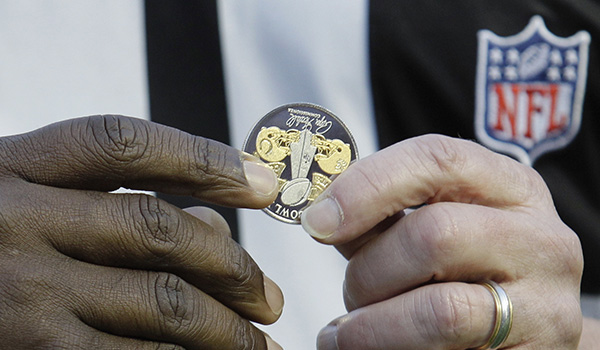 Oh, you rookie football bettors, honestly believing that handicapping the Super Bowl 54 coin toss is guess work, a simple 50-50 proposition.
Such a novice attitude when this bet merits the careful contemplation of football academia and serious study of coin toss historians.
There are obvious patterns. There are unmistakable trends. There are ways you can turn this misleading embodiment of how to settle a spat in an objective, non-partisan fashion into a one-sided, money-making event this Sunday.

Sure, you can look at recent streaks where tails enjoys a 5-1 hot hand. Ditto the NFC’s 5-1 streak over the same period. But that’s pretty amateur stuff. The real Vegas professionals invest according to BetOnSuperBowl.com’s exhaustive Super Bowl coin toss study.
Win the coin toss, lose the game
Watch video of recent Super Bowls past and you see team captains pumped up when they win the coin toss. But those same captains are bummed out a few hours later when their team loses. This has happened in the past six Super Bowls.
Since this is pretty much guaranteed to happen again, watch Super Bowl coin toss props such as ‘Will the team that wins the coin toss also win the game’ and quickly get your money down on ‘No.’

NFC dominates the coin toss
While the recent history is impressive (5-1 in the past six games), coin toss naysayers who feel the AFC stands a fair shot are proven foolish over the longer term. Since Super Bowl 32, the NFC has won 19 of the 22 coin tosses, including a clearly crooked stretch of 14 straight wins.
Note, the NFC didn’t call every game right, sometimes the AFC called it wrong. But you get the idea. Clearly not a fair fight when the team captains gather to decide who gets the ball first.
Identical six-game pattern of ‘Tails, Tails, Tails, Tails, Heads, Tails’
Since Super Bowl 32, this pattern has repeated itself three times. You think that’s a fluke? Of course not, it’s the undiscovered Deflategate of Super Bowl coin tosses.
Bettors have been able to make a killing off this trend. However, the problem for Super Bowl 54 bettors is that we are right at the end of this six-game sequence and history doesn’t tell us whether heads or tails comes next.
After the pattern ended in Super Bowl 37, the next bowl was tails. After the pattern ended at Super Bowl 42, the next bowl was heads. We predict tails will come up and we’ll start the next pattern (which you can profit from for the next six Super Bowls).
It’s also what sportsbook manager Adam Burns hopes will happen, because more action for Super Bowl 54 is on heads, again.
“Coin toss is always a staple prop bet that people seem to love betting and always takes so much money, and it seems we always end up needing Tails for some reason,” said Adam Burns, from online shop Betonline.ag. “That seems to be the trend again heading towards Sunday, with 55% on Heads.”

Heads AFC wins, Tails NFC wins
Since Super 46, this pattern is a 100 per cent lock at 8-0. Heads, and the AFC will win the Super Bowl coin toss. Tails and its the NFC.

Niners win coin toss, usually win game
San Francisco has won five Super Bowls. Four times, they won the coin toss. In Super Bowls 16, 19, 23 and 29, they won the toss. They lost the toss to Denver in Super Bowl 24. They also lost the toss in their Super Bowl 47 loss to Baltimore.
Kansas City has been to just one Super Bowl, but just so you know – they lost the Super Bowl 4 coin toss to the Vikings but won the game.
Patriots lose toss, win game: Patriots win toss, lose game
Yes, we are aware the New England Patriots are NOT in the Super Bowl for a pleasant change. But next time they are (hopefully not for many decades), here is the 100 per cent lock on how to bet that future game.
New England has famously been to eight Super Bowls in the past two decades, and they boast this 8-0 perfect trend. When New England wins the coin toss (three times), they lose the game. When New England loses the coin toss (five times), they win the game.

So, while you may decide to flip a coin to decide which of your buddies has to get up from the sofa to grab beer from the fridge Sunday, don’t trust that method for deciding how to bet the Super Bowl 54 coin toss prop.
Rely on history and hard data.