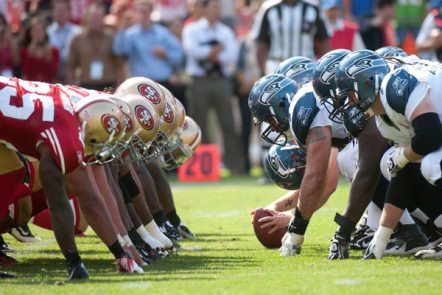 When the conversation turns to Super Bowl XLIX, it’s hard to start anywhere but the NFC West Division. The crowded grouping not only includes the reigning champion Seattle Seahawks, but also a San Francisco 49ers team whose SuperBowl odds sit second from the top in the sportsbook.
The title, however, is Seattle’s to lose and for that reason they’re the team out in front with 11/2 odds.

The Plan for Seattle

Heading into the long NFL offseason, the Seahawks can look forward to the 2014 campaign with the peace of mind that they scaled the mountain in 2013, effectively capitalizing on the gradual momentum they’d established over the previous few seasons. What’s more, the core of the powerhouse team that did it will be right back at CenturyLink Field come next fall.
Not only are Russell Wilson, Richard Sherman and Super Bowl MVP Malcolm Smith slated to be back in action for the squad, at just 25, 25 and 24 years old respectively, they’re just about to hit the prime of their careers. That’s terrible news for the rest of the NFL.
The Seahawks will also see 2013 offseason addition Percy Harvin play a bigger role with the squad heading forward. The jack of all trades receiver only played in one regular season game for the squad and figures to be a difference maker in Pete Carroll’s lineup in 2014.

Next on the Horizon

The Niners aren’t just the little brother looking up at Seattle from their vantage point in the Bay Area; they’re a legitimate title threat themselves, hence their 13/2 Super Bowl betting odds.
Can Jim Harbaugh and company salvage his contender after two years of tragic postseason endings? Colin Kaepernick will be happy to help him try.
Elsewhere in the NFL, familiar faces Tom Brady and Peyton Manning continue to hang in the picture. The window for both, however, is starting to close. Brady’s New England Patriots have 9/1 odds of winning the Super Bowl, while Manning’s Denver Broncos have 10/1 after coughing up the Super Bowl XLVIII title in dramatic fashion to Seattle.
The new season also brings with it new opportunity. That, of course, will not be lost on the Green Bay Packers. After winning the title at Super Bowl XLV, the Packers haven’t managed to replicate the success. Another, ideally healthier, season may be all quarterback Aaron Rodgers and second-year running back Eddie Lacy need to put the franchise back on the map.
Up and comers who battled into the playoffs this season are also Superbowl online betting options that one can’t simply overlook. The Carolina Panthers and Indianapolis Colts sit tied on the Super Bowl lines with 20/1 odds of winning it all, while the playoff representative Cincinnati Bengals sit further down the list at 33/1.
Veteran squads like the New Orleans Saints (22/1), Chicago Bears (25/1) and Kansas City Chiefs (25/1) help round out the picture.
We don’t know that the Bears will get any more out of Jay Cutler than they did in 2013, but with the receiving duo of Brandon Marshall and Alshon Jeffery, they’re a tough team to discount. Drew Brees’ Saints, too, are a prolific team that can never be underestimated. As for Andy Reid’s Chiefs, there’s little to tell – the KC squad shattered expectations last season and there’s no reason to believe that they can’t match last year’s punishing, methodical success.
Of the 32 teams in contention for Super Bowl XLIX, the majority could at least contend for a shot in the postseason. That may make it slightly more complicated to bet on the Superbowl, but it’s what makes the sport so great in the first place.