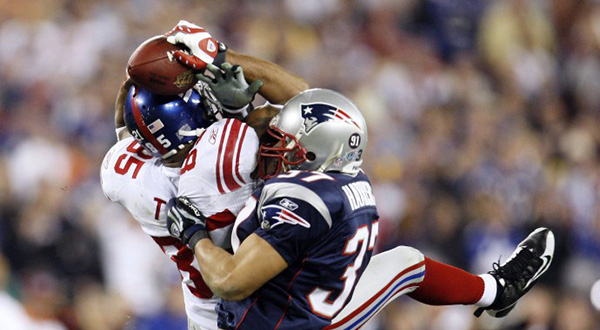 Garo’s Gaffe. Wide Right. The Helmet Catch. These moments have been etched into Super Bowl lore, replayed countless times on NFL Films and burned into the memory cells of football fans around the world. The Super Bowl wouldn’t have been quite so super without these highlight moments.  These are the Biggest Highlights in Super Bowl History.

Super Bowl VII – Garo’s Gaffe: With the Miami Dolphins just 2:07 away from shutting out the Washington Redskins (+1) and completing their perfect season, place-kicker Garo Yepremian lined up for a 42-yard field goal with his Dolphins up 14-0. The kick was blocked, but instead of falling on the ball, Yepremian tried a pass. The ball slipped out of his hand and was returned by Mike Bass for a touchdown. Miami managed to hold on for the 14-7 win.

Super Bowl XVII – 70 Chip: Ten years later, the Redskins got their revenge. Down 17-13 in the fourth quarter, Washington faced a 4th-and-1 on Miami’s 43-yard line. Burly RB John Riggins was given the ball, but instead of a simple plunge up the middle, the Redskins surprised Miami by calling the “70 Chip” play, opening up a hole on the left side that allowed Riggins to rumble into the end zone. The Redskins (+3) won 27-17 to claim their first Super Bowl.

Super Bowl XXV – Wide Right: The Buffalo Bills reached the Super Bowl four straight years and didn’t win any of them. The most painful loss for Bills fans was the first one against the New York Giants (+7), who were leading 20-19 when Buffalo place-kicker Scott Norwood lined up for a 47-yard field goal attempt with just eight seconds remaining. Norwood missed to the right – not an easy kick, but disappointing enough that Norwood eventually dropped out of public sight and became an insurance salesman.

Super Bowl XXXII – The Helicopter: The Denver Broncos (+11) were tied 17-17 with the Green Bay Packers in the third quarter. Broncos QB John Elway had the ball at Green Bay’s 12-yard line and was looking for a receiver; finding none, Elway started running. Packers safety LeRoy Butler tackled the leaping Elway and sent him spinning sideways through the air. Elway landed at the 4-yard line, good enough for a first down, and the Broncos scored two plays later on their way to a 31-24 victory.

Super Bowl XXXIV – One Yard Short: The Tennessee Titans were down 23-16 to the St. Louis Rams (–7) with six seconds left on the clock and the ball at the St. Louis 10-yard line. Steve McNair passed the ball to Kevin Dyson, who was tackled by Rams linebacker Mike Jones just short of the goal line. Dyson tried valiantly to extend the nose of the ball over the line, but it was not to be.

Super Bowl XLII – The Helmet Catch: Tom Brady and the New England Patriots (–12) were about to match Miami’s undefeated season and win their fourth Super Bowl. They were up 14-10 on the Giants with a little over two minutes to play, but Eli Manning scrambled away and heaved the ball toward little-used David Tyree, who made a leaping grab and ended up pinning the ball on top of his own helmet to complete the catch. The Giants scored seconds later to make the final 17-14. It was the last catch Tyree made as a professional.

Super Bowl XLIX – No Beast Mode: Russell Wilson and the Seattle Seahawks (-1) had driven all the way down to the New England Patriots’ one-yard line with just 20 seconds remaining in the game and trailing 28-24 on the scoreboard. The entire world expected Wilson to hand the ball off to running back Marshawn Lynch but instead he attempted a short pass to Ricardo Lockette – which was picked off by Pats rookie cornerback Malcolm Butler to secure the win for New England. Despite Butler’s late heroics, however, it was Patriots quarterback Tom Brady that was named Super Bowl MVP for the third time in his career.

Super Bowl 50 – Defense wins championships, and the better unit proved to be the difference when the Denver Broncos upset the Carolina Panthers 24 -10 as six-point underdogs to win Super Bowl 50. Driven by Super Bowl MVP Von Miller, the Broncos put forth an early expression in the defining moment, up against regular season NFL MVP Cam Newton and the rest of the Panthers on the way to bringing home the franchise’s third Vince Lombardi Trophy.

Super Bowl 52 – Philly Special –  (Watch the play) The Eagles had never won a Super Bowl, failing in both previous trips, as they faced the Patriots in Minneapolis. But they were not going down without a fight and not before emptying their bag of tricks this time. A fourth down trick play where QB Nick Foles sprinted into the flat and caught a touchdown pass from WR Trey Burton that kept the Eagles ahead. They eventually won the game.